When I bought my 1996 BMW M3 two summers ago, I knew what I was getting into. With 186,000 miles on the odometer and numerous signs of, lets call it, “aggressive driving history,” there was a clear need for TLC. Alas, the sweet sound of a straight-six engine and poetic communication through the steering rack sold me beyond any hope of logic.

The first two months of motoring were uneventful. Granted, I only put about 500 miles on the clock in that time, but every stint behind the wheel was a dream. Then, as anticipated, things started to go wrong. First the passenger window regulator gave up, then the rear shocks failed, the windshield washer pump quit, the door lock actuators jammed, the driveshaft donut ate itself, and, finally, the driveshaft itself sheared.

My service mechanic and I became good friends (not good enough for a discount, though) as I repaired each of the M3’s faults. I couldn’t be upset with the car — all issues were age or wear related. Rather, I appreciated every drive that much more. Today, the car is like a recovering alcoholic (82 days and counting without a maintenance relapse). Finally, instead of just fixing its problems, I’m starting to improve its performance.

By the time I purchased the M3, its Michelin Pilot Super Sport tires were already 60 percent cooked. Though I’ve put just 6,000 miles on the car in two years, it’s time for a fresh set of rubber. In the Max Performance summer category, there are a number of great options, including Michelin’s new PS4S, Bridgestone’s Potenza S-04 Pole Position, and Pirelli’s P Zero Rosso Asimmetrico.

Each tire is rated for excellent wet and dry performance, so the decision comes down to the value proposition. At about $140 per tire, the P Zero Asimmetricos are $15 cheaper than the Pole Positions and $40 cheaper than the PS4S rubber. After reaching out to Pirelli for a sample set in 225-section front and 245-section rear, I’m mounted and balanced on my new P Zeros and ready to get a new baseline for performance.

I’ll admit, I judged the tread pattern of the new Pirellis as less aggressive than that of my retiring Michelins and therefore anticipated lower limits than even my worn Pilot Sports. Compared to the neat lines and sharp grooves of the outgoing tires, the Asimmetrico tread looks busy and confused. Shows how much looks count in the world of performance tires. With a mere 0.6 inches of average rainfall in a Southern California October, I never expected to test the wet weather performance of the Asimmetricos. Miraculously, though, two days of downpour provide sufficiently slick surfaces to gather impressions.

Acceleration, braking, and rapid changes of direction do little to unsettle the Pirellis. As I push the envelope, the tires eventually break free, but in a tractable slide that’s easily recoverable. Never do I feel unsafe driving the M3 at a good pace on the highway or around town. Though I’m not able to trod through more than a puddle of standing water, there’s enough of a rooster tail coming off the back of my car to claim challenging conditions.

If there is a discernable performance difference between the P Zero Asimmetricos and the Michelin PS4S tires, I expect it’s only appreciable while pushing the limits on a racetrack. That may be a test worth undertaking, but something tells me a trip to the track will cost my M3 more than just fuel. Eighty-three days since my last drop of oil … 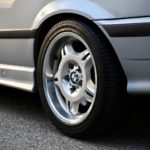