Moab, Utah, is the intersection of extremes.

Summers are desperately warm; winters are cuttingly cold. Grim weather materializes on the horizon and is upon you in the blink of an eye. Panting in the thin, dry air at 4,000 feet of elevation, one must consume liter after liter of water, no matter if skies are cloudless or storming. A silent landscape of red rock peaks and parched brown valleys becomes a howling chamber of sand-laced wind. Miles of flat earth extend to the foot of towering rock walls, motionless tsunamis on the horizon.

Moab is dangerous, desolate, and a destination for tens of thousands of visitors each year. These adventurous souls flock to where extreme topography provides ideal conditions for hiking, biking, climbing, rafting, and off-roading.

The Slim Pickins stars aren’t unique. During my week in eastern Utah, I met countless settlers who couldn’t imagine life anywhere else. Indeed, by the time I prepared to board the plane home, I too felt a wild impulse to linger … perhaps indefinitely.

I’ve long dreamt of visiting Moab. It was visions of scampering up precipitous rock faces and slogging through muddy trails that led me to purchase a Jeep Wrangler. “Someday,” I reasoned, “I’ll go for it.”

Thanks to an invitation from Cooper Tire & Rubber Company, I finally made it to the mecca of the 4×4 — ready to embrace my fantasy.

Upon arrival at Moab Under Canvas, a luxury campsite just north of downtown Moab, I spent two hours pointing my camera in every direction. The pale blue sky, orange soil, and wind-worn landscape were unlike anything my suburbanite eyes had seen. When the sun finally slipped from view, golden light ambled for a short while until night fell like a heavy blanket. Stars littered the sky, twinkling around a smear of the Milky Way.

I had never felt so small.

Rising with the sun the following morning, I hurriedly dressed, lathered on sunscreen, and joined my fellow adventurers for an introduction to our Jeep companions. A dozen, heavily modified JK-generation Wranglers, each sitting on Cooper’s Discover STT Pro mud terrain tires, were chaperoned by five Outlaw Jeep Tour guides.

Outlaw gave us a rundown on how to operate the transfer case, lock the front and rear differentials, release the swaybars, and use the winch. Then it was the Cooper team’s turn to explain what sets the STT Pros apart from other mountain terrain tires.

At the time, I was only loosely familiar with Cooper Tires, having experienced the company’s street performance tire while attending the Lucas Oil Racing School. This was the first I’d heard of a Cooper-made off-road tire, but my crash course yielded some impressive intel.

Each STT Pro tire is “self-cleaning” thanks to two bits of technology: air pockets and dimples to pop out mud when tires flex, and rivets in the tire to release small rocks. Other highlights include tie bars for rigidity, a flex groove that folds to mate outer and main tread when the tire is aired down, built-in resistance to chunking and chipping on jagged rocks, and enduring grip in slippery conditions. This all sounded cool, but I reserved judgment for the trails.

Selecting a lime green Wrangler four-door (whom I promptly name Franklin), I fell in line with the group as we made for the Seven Mile Rim trailhead. Rated a 5 out of 10 in terms of difficulty, the two-track route passes a uranium mine via dirt, slickrock, and sand surfaces. A cloudless sky suggested ideal conditions. 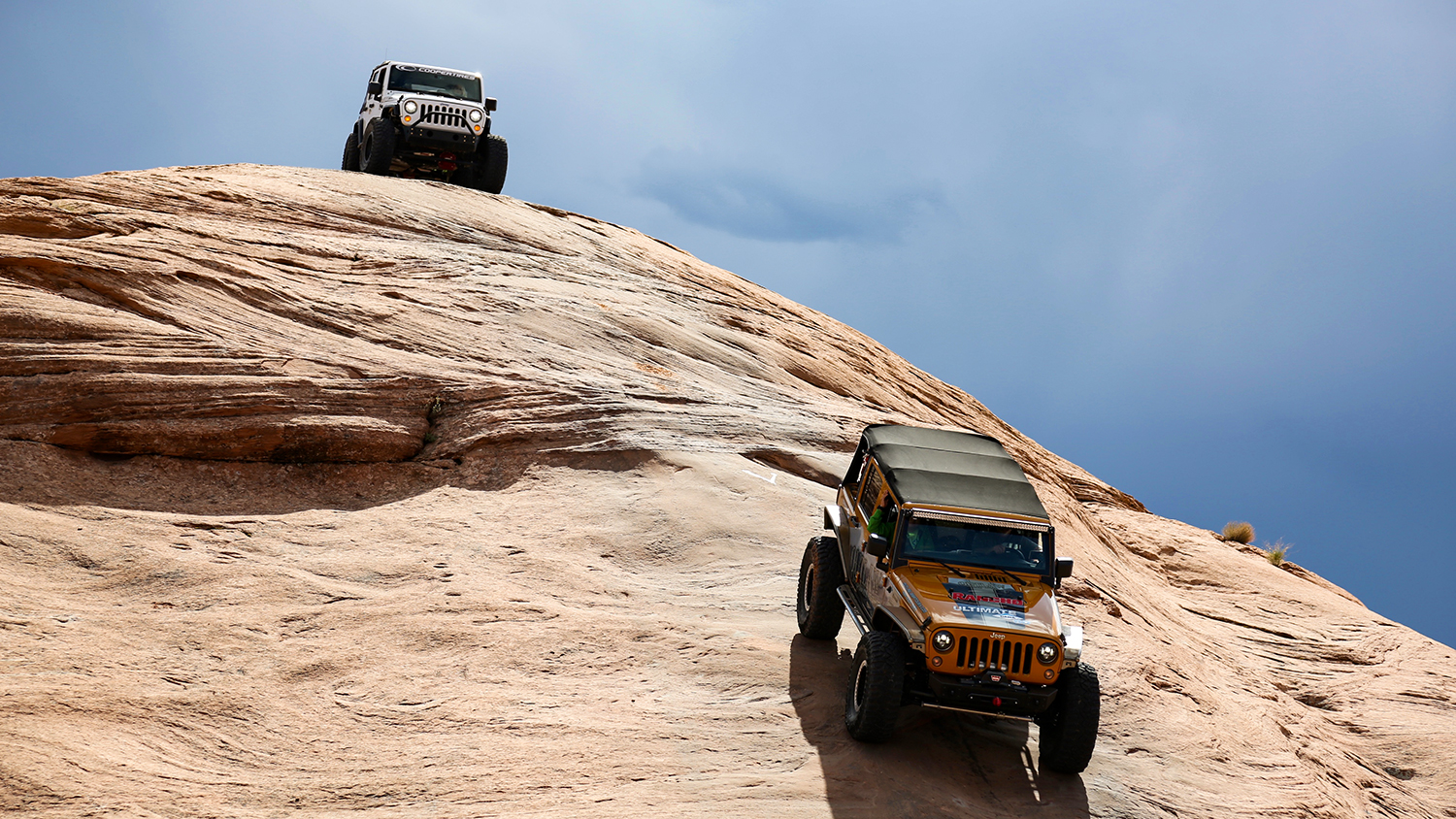 Just a mile in, we encountered our first obstacle. The guides easily descended a steep ledge before jumping out to assist us. With a mixture of hand signals and vocal commands, our leaders directed wheel placement and throttle input. Confidently, the Wranglers pitched forward, crept down, and continued on — not a hint of slip.

Further ahead, a sand-dusted rock face blocked our path. “Guess we’ll be heading around that,” I concluded. A moment later, I watched with incredulity as the lead Jeep scuttled up and over.

“The key is to be smooth and let the tires do their job,” the guide instructed on the radio. Sure enough, angling my tires as indicated and measuring out power, I conquered the hurdle.

Arriving at Uranium Arch, we paused for lunch. Finding shade beneath the massive outcrop, I drained three water bottles and devoured a sandwich. We’d been warned, but I was skeptical: four-wheeling is exhausting work. Without much time to recover, Outlaw’s crew ushered us back to the Jeeps.

At a slow, steady pace, our group surmounted every obstacle in our path. Each time I judged the challenge too great, our guides revealed a way to overcome. Finally, we reached the trail’s conclusion in the shadow of Courthouse Rock. Beaming with accomplishment, we posed for a photo next to our victorious vehicles.

The next day, my neck, shoulders, and forearms were tense, reminding me of the off-road battle to come. The same lineup of Jeeps awaited our team in the gravel parking lot, only this time the sky was a patchwork of dark clouds. Sure enough, before we’d run through our final checks, water droplets began pelting metal hoods and ragtop roofs.

“This is a great opportunity to show off the tires’ mud performance,” declared Scott Jameson, Cooper’s director of product.

With everyone assembled, Outlaw lead the way to the Hell’s Revenge trail. Given what we’d faced the day before, hearing this route was scaled an 8 out of 10 sent my mind racing. I didn’t have long to imagine what sort of challenges lay ahead before we reached the trailhead.

From the word “go,” we were climbing a narrow rock slope at a 45-degree angle. Shimmying up the surface, I gauged an 80-foot drop just three feet in either direction. “Stay on the black path,” warned Jeremy, our lead guide. Obediently, I ascendd with all four tires on marked earth. 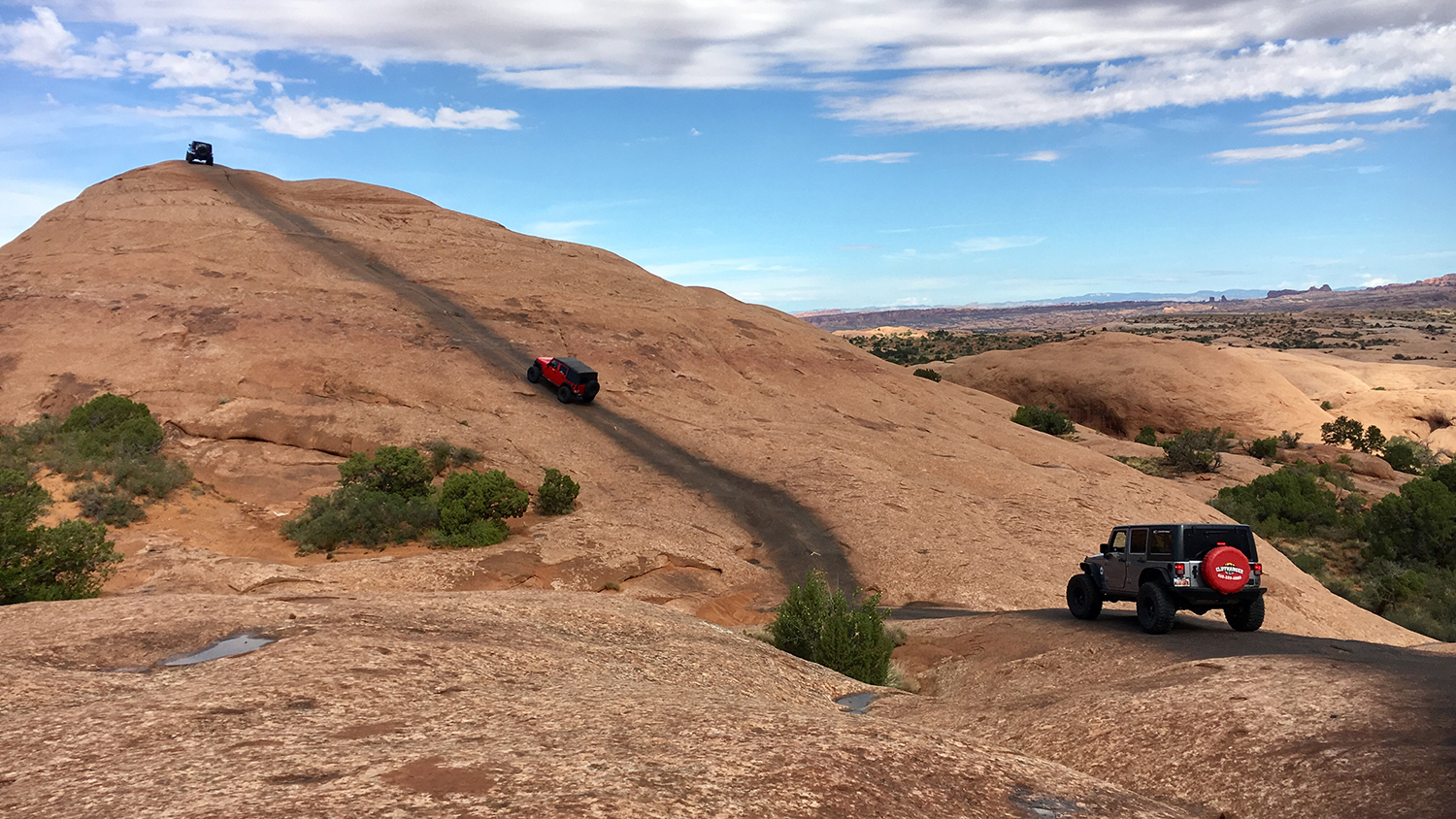 The rain came and went as we beat new obstacle variations. Twice, I was forced to engage the front and rear lockers to clamber over barriers; it felt like cheating when I did. Any struggle I faced was all too easy for a diff-locked Wrangler.

Moving at a slower pace than the day before, we made it to Hell’s Gate behind schedule. Hell’s Gate is one of the most famous 4×4 obstacles in Moab: a steep decline and raggedy incline make for a thrilling spectacle. With a perfect line, patience, and smooth momentum, you’ll exit a star. Lack any of these traits, however, and you’re bound to tumble straight to the bottom.

Jeremy has completed Hell’s Gate more times than he can count. With complete confidence, he loaded three of us in his Jeep and navigated both sections flawlessly. Hoping to scare us, he faked brake failure just before cleared the rim … the stunt worked as intended.

Still jittering from the Gate, we hurried to complete the trail.

Just as we began to ascend another rock slope, rain showers started anew. Unfazed, we soldiered on, but suddenly the weather took a nosedive. Water ripped sideways along the windshield and wind rocked our 4,500-lb Wranglers from the right. “We need to get up this hill now,” came Jeremy’s command through the radio.

Compliantly, and with the same trust we afforded Outlaw’s staff for the past two days, we scurried up the oversized boulder. At any moment, I expected Franklin to go sliding over the edge, but the tires adhered diligently. We rode out the worst of the storm in a huddle, watching peals of lightning touch down left and right.

Two miles later, after the downpour finally let up, I returned the gear lever to 2H and rejoined paved roads. Curiously, I wasn’t at all traumatized by what had just transpired.

Later that night, I conferred with my fellow drivers, who were equally composed. We all agreed: it was the confidence of our guides that gave us courage and calm.

Perhaps that’s Moab’s greatest juxtaposition of character, and the one which beckons visitors to stay: all extremes (weather, terrain, or otherwise) are greeted by residents with astounding composure.