Since its inception, Infiniti has struggled to pry itself from Nissan’s underbelly. The “luxury” automaker has always been light on the premium components that earn distinction in the marketplace. The designs, equipment, and powertrains have always been too similar to Nissan’s mainstream for Infiniti to really stand out. Of course, Infiniti isn’t alone in the struggle. Lexus didn’t instantly become a luxury superpower born from Toyota’s womb and Acura gets sucked back into Honda’s brand oversight all too often.

Infiniti’s sales, to this point, have not been determined by consumer desire, but rather aggressive pricing and impressive performance. But something’s changing deep within the Japanese automaker. The Mercedes-Benz GLA-based QX30 is stylish, efficient, and priced right for first-time luxury buyers. And before the dust has settled on Infiniti’s compact crossover, the brand has introduced a successor to its G37 coupe.

The all-new Q60 is gunning for luxury elites with fresh looks, potent powertrains, and interior refinement.

Within the entry-level luxury coupe segment, at least 50-percent of the buyer decision comes down to styling. The Q50 sedan was the world’s first look at inspired styling from Infiniti, and while handsome, it’s difficult to create much enthusiasm for a sedan. Every luxury brand needs a design flagship. 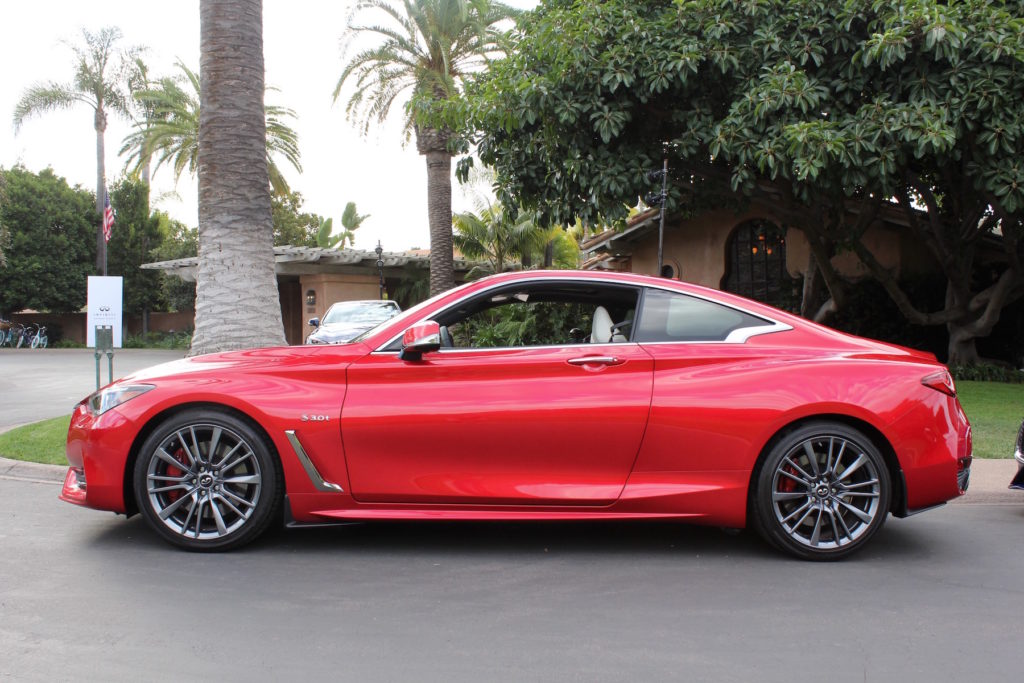 In the words of Infiniti’s Executive Design Director, the Q60 represents “lean muscularity.” The large double-arch grille, signature crescent c-pillar, and “human-eye” headlights will appear on future models. Unlike the trend of over-designed vehicle exteriors, each curve and edge looks essential to the Q60’s shape.

Modern automotive design looks more like leftovers than fresh dishes, yet the Q60’s distinctive beauty is not easily traced to other production cars. I’m particularly fond of the car’s rear end, which is a far more subtle display of power than the bold front fascia. Among its current competitors, including the BMW 4 Series, Audi A5, Mercedes-Benz C-Class Coupe, and Lexus RC, the Q60 is by far the most alluring. Its styling doesn’t get lost in a sea of premium coupes.

The Q60 comes out of the gates strong with its exterior design, but stumbles a bit within its cabin. The interior designers have committed the sin of over indulgence. A slew of textures, materials, and styles confuse the eye and hand. Leather-wrapped panels arranged next to soft-touch inserts disrupt the layout almost as much as frenzied seam lines along the door panel. It would appear the design team couldn’t decide which theme was best, so they tried them all.

The Q60’s weak points include some intense silver carbon fiber-esque woven trim, outdated analogue gauges, and a 4-year-old navigation screen. Then there’s the lack of headroom. As a 6-foot male, I’m slightly above average height, but by no means a giant. Yet with the driver’s seat lowered as much as possible, I have less than an inch of clearance. This isn’t a car for lengthy Americans.

There are high points to the interior, however. The seats are as elegant as they are comfortable, the anthracite and metal trims (alternatives to the silver pattern) are attractive, and the leather-wrapped steering wheel looks and feels sublime.

It’s evident that Infiniti’s designers are clued into the best traits of a luxury cabin, but something’s been lost in translation. I expect this high-end essence will yield refinement in future products.

The Q50’s design leap was marred by a departure from Infiniti’s performance strengths. All is made right with the 2017 Q60. Much of the car’s disappointing performance was linked to its Direct Adaptive Steering system (a.k.a. drive-by-wire). Where traditional steering racks are directly connected to the front axle, Infiniti introduced a computer-controlled mediator. Inputs through the wheel would be sent to a standalone CCU, which then communicated movements to the wheels. While an innovative concept, the execution was flawed. Infiniti’s jittery, over-responsive system made even the most calm and collected drivers nervous.

A new generation of Infiniti’s DAS debuts in the Q60, and the brand’s engineers promise it’s a far more rewarding experience. They’re right. Provided proper adjustments to the seven steering settings, the inputs are accurate and reasonably engaging. As part of the new DAS system, steering ratios infinitely adjust. Why would you want that? In casual driving situations, the dramatic impact of a short-ratio steering system is undesirable, but during demanding maneuvers, larger steering ratios mean more work to steer the vehicle. An adaptive steering ratio can adjust the required wheel movement intuitively based on driving behavior. In this way, the Q60 is far more adept as a dual-persona vehicle than most sport-lux rides.

Infiniti’s new DAS system is significantly improved, but the overwhelming number of adjustments will almost certainly compel drivers to leave things in their default modes. Customization is great, but more important is the fact that this drive-by-wire system feels natural.

The biggest surprise of Infiniti’s Q60 overhaul is its suspension. Dynamic Digital Suspension, as Infiniti calls it, is an adaptive damping system like GM’s Magnetic Ride Contol. A completely in-house engineering feat, the system intuitively stiffens or softens the ride quality based on performance demands or road surface characteristics. Of course, on smooth California back roads, ride quality is perfect, but only by venturing on a grooved, uneven dirt road do I grasp the setup’s potential. Large dips are no match for Infiniti’s sophisticated dampers. And once back on solid ground, the suspension hunkers down and controls body roll.

Then there’s Infiniti’s all-new 3.0-liter twin-turbo V6. First of a new VR series of engines, 300hp and 400hp outputs are created based on tweaks to the boost pressure, turbo speed sensor, and water pump. A turbocharged 2.0-liter 4-cylinder is available for those who just want the Q60’s looks, but the Red Sport’s performance is not to be missed. Paired with a 7-speed automatic transmission, the range-topping output is channeled through standard rear-wheel drive or available all-wheel drive.

Velvety power sends the Q60 Red Sport to 60 mph in just 4.4 seconds – on par with BMW’s 435i M Sport. Sadly, while previous G-coupes mate acceleration with an exotic exhaust note, the Q60’s twin-turbo acoustics are a letdown. Muffling road noise within the cabin is one thing, but stifling a performance car’s soul is a no-no.

The 2017 Infiniti Q60 is improved in every measurable way over its G-badged ancestors – and not just marginally. Its provocative design, sophisticated suspension, powerful motor, and comfortable interior are on par or exceed today’s best luxury coupes. BMW, Lexus, Audi, and Mercedes-Benz have a prize fight on their hands.