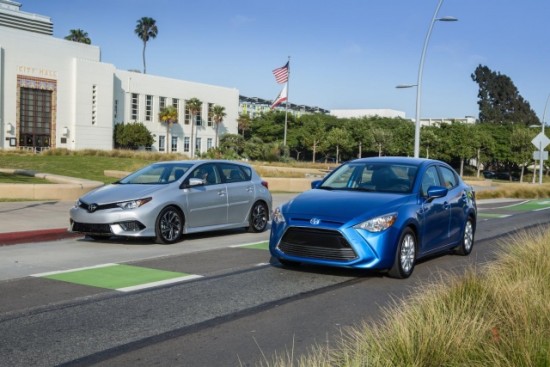 With the introduction of the 2016 iM and iA, Scion is attempting to reinvent itself. While that may seem strange for a brand that’s only been in the market for 12 years, Scion’s audience has changed flavors. While the 18- to 35-year-old crowd is still the target, Scion recognizes that its buyers are more pragmatic, and likely don’t have thousands of dollars to invest in body kits, rims, graphics and spoilers. That’s part of the reason why the xB is being sent out to pasture at the end of 2015. Scion just can’t hold out hope that its individualistic consumer will still be there in two years.

You’ll really be considering a Mazda2 or Toyota Auris, but that’s good news.

A more conservative Scion will be introducing its new creations this fall, but you won’t be test driving a “Scion” iA or iM in September, you’ll be sitting in a Mazda2 sedan or Toyota Auris, and that’s not a bad thing. The European market Toyota Auris takes on a low-profile body kit to become the iM, and the Mazda2 wears a wide-mouthed grille to get into iA character.

Scion may be marketing the subcompact iA and hatchback iM within the same campaign, at similar price points, but I found them to have completely different characters. I’ll let you figure out which I preferred.

The iM has far more in common with “old Scion” than the iA, not just because it gets a low front fascia, side skirts, and 17-inch alloy wheels, but because its versatile shape helps fill the void left by the xD and soon-to-be-deceased xB. With 60/40 split folding rear seats and generous trunk space, iM buyers will have plenty of room for themselves and four other friends to fill up the car and go get into trouble.

Powering the iM is a 1.8-liter four-cylinder engine from the Toyota Corolla with 137 horsepower and 126 pound-feet of torque. Its powertrain can be mated to either a six-speed manual or CVT transmission. Up front is a MacPherson strut setup, while Scion has invested in a double-wishbone rear suspension. With stiff competition from rivals like the Ford Focus, Elantra GT, Golf S, and Mazda3 hatchback, the iM needed to stand out not just in looks or interior equipment, but its fun-to-drive factor.

Working against the iM is its weight: At just under 3,000 pounds, 137 hp is a somewhat meager amount of power to battle the forces of gravity. On the twisty roads in San Mateo, California, the iM quickly revealed its strengths and weaknesses.

I was amazed with how compliant the chassis felt during hard cornering; there was virtually zero body roll, and the wide tires helped keep the iM planted at all times. The brakes were equally impressive, letting the middleweight hatchback scrub speed effectively and without much drama. Its phenomenal suspension and platform unfortunately brought extra attention to its somewhat underwhelming power.

In need of a heart transplant

Keeping in mind that the average iM buyer won’t be hammering up and down twisty roads, the iM still seemed to struggle to find the guts to confidently pass cars on the highway or tackle steep hills. Dropping down what feels like one gear too low, the iM survives in these scenarios, but it can’t disguise the fact that it needs to hit the treadmill.

The CVT transmission, in sport mode, was easily the better of the transmission options, helping the iM feel spunky around town, and stay in the right gear on curvy roads. The six-speed manual wasn’t a bad gearbox, but considering you lose a bit of fuel efficiency, and it doesn’t help derive any more “sportiness” from the 1.8-liter engine, I’d pay the extra $740 for the CVT (I can’t believe I just wrote that).

What its engine lacks in raw power, it makes up in fuel efficiency. The iM gets 28 city and 36 highway miles per gallon with the CVT, which is quite good for its class.

Scion’s “mono spec” pricing structure adds all the above for $18,460 with the six-speed manual, or $19,200 with the CVT. Priced in the middle of its competitive set, the iM may not be a cheap starting price point, but adding convenience features to other models will quickly turn the iM into a bargain. You’re also welcome to call it a Corolla wagon if the iM badge throws you.

Toyota’s partnership with Mazda will eventually push its electric components into future Mazdas, but for now, Toyota is on the receiving end of Mazda’s efficient 1.5-liter SkyActiv four-cylinder engine and its Mexico-produced Mazda2 sedan. While the Mazda2 will be sold in Canada and Mexico, the automaker chose to give Toyota a shot at selling the Scion-badged iA here in the states.

The iA will go on sale at a price point near the bottom of its segment: $15,700 for the six-speed manual, and $16,800 for the six-speed automatic. For your money, Scion includes 16-inch alloy wheels, turn-signal repeaters in the side mirrors, a low-speed forward-collision warning system, cruise control, air conditioning, keyless entry, push-button ignition, a backup camera, and Mazda’s 7-inch infotainment system screen. Other highlights include 13.5 cubic feet of trunk space (more than the Toyota Corolla), and best-in-class fuel economy.

Besides a Scion logo on the steering wheel, the interior comes straight out of the Mazda2, and it’s a great place to be. The infotainment system is quick, intuitive, and clear, the build materials are, for the most part, either soft-touch or textured, and there’s plenty of space to seat five people for short or mid-length drives. Fold down the 60/40 split rear seats and there’s a seriously impressive amount of capacity.

The iA’s utility is cause for a head nod, but the driving experience is cause for a broad grin. It may make just 106 hp and 103 lb-ft of torque, but at just under 2,400 pounds, the iA doesn’t have a whole lot of weight to move around, either. From the drivers seat, the light, but direct steering and perky motor are highly appealing.

Unlike the iM, the iA belongs with the six-speed manual. While the automatic gets two miles per gallon better EPA estimates in the city, the combined MPG is only a differential of one: 37 mpg versus 36 mpg with the manual. That means if you opt for the sweet, short-throwing, direct-shifting manual gearbox, you save $1,100 up front, and won’t be complaining about the fuel efficiency down the road.

Around town, the iA has plenty of poke, and while it labors at higher speeds, it never stops willing you along. If there’s one knock on the iA, it’s the amount of body roll that comes from quick direction changes. During our drive through twisty mountain roads, the iA required that extra split-second to resettle itself before it was ready to pitch into the next corner. As with the iM, the average buyer will never drive the iA aggressively, but it was worth noting. The braking, while not astounding, was up to par, and the steering was wonderfully responsive. Stacked up against rivals like the Hyundai Accent, Ford Fiesta sedan, Chevy Sonic, and Nissan Versa, only the Fiesta is as rewarding to drive.

The iA’s front fascia may not be my cup of tea, but for under $16 grand, I couldn’t find a fatal flaw that would steer a buyer to the competition. It’s a darn good thing Mazda isn’t selling the 2 sedan here in the U.S., because with its handsomely redesigned face, Scion’s only competition for the iA would be its Mazda2 twin.

Scion doesn’t need to convince me that a shift towards more conservative, bang-for-the-buck models is the right decision. The time for tuner cars and polarizing designs is over, for now. Partnering with Mazda to gain rights to its excellent Mazda2 and borrowing Toyota of Europe’s Auris hatchback just makes sense.

After a healthy amount of time driving both models, I can confidently call the iA a segment buster, while the iM feels like just another compact hatchback option. If the iM’s design doesn’t wow you, it isn’t distinguishable enough from the competition to sell in large quantities. The iA, however, is stunning value for money, and its gearbox, fuel efficiency, and attractive looks will undoubtedly bring hoards of new buyers into the Scion fold.