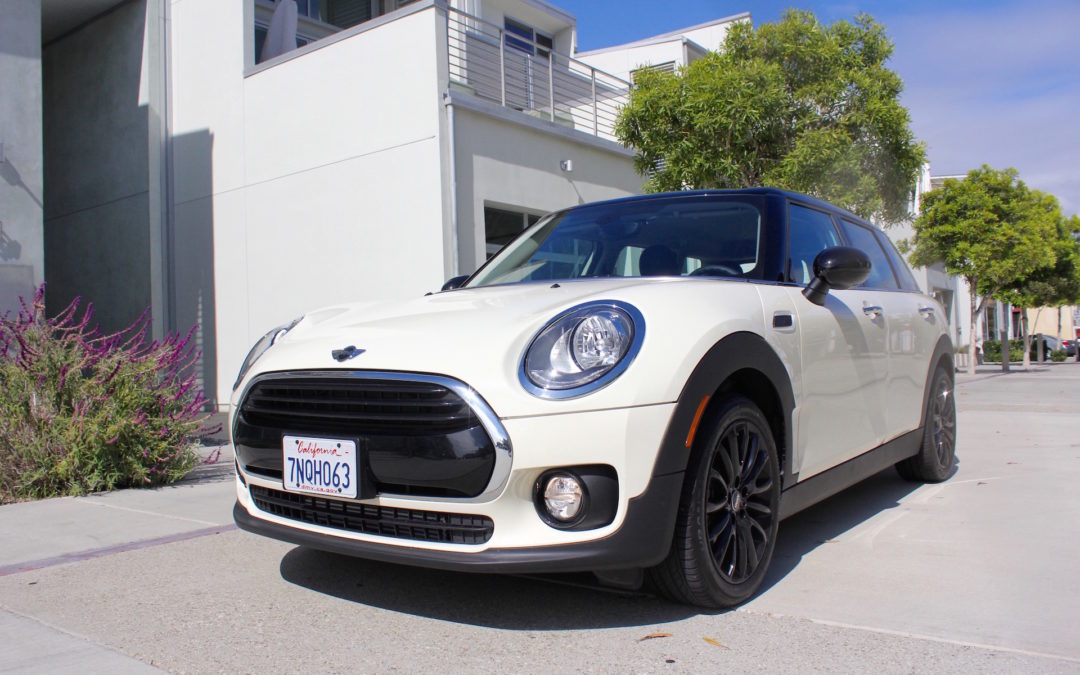 MINI’s Cooper Clubman arrives with an all-new design for 2016, frugal powertrains, and the largest footprint of any MINI model to date. Though the brand has been the butt of many-a-joke since it began producing larger vehicles, it may surprise some that each car has remained within the subcompact category – until now. MINI’s first compact segment vehicle is the second generation Clubman, aimed at a more mature crowd who find the 4-door Hardtop a tad on the cramped side.

MINIs don’t quite fit in whichever box the market applies. In terms of footprint, sure, you can call them sedans or crossovers, but their proportions and designs are really unlike anything out there. The Clubman is no different. On paper, the MINI stacks up against the Ford Focus, Chevrolet Cruze, Honda Civic, Hyundai Elantra, and even the Audi A3 – all in hatchback iterations – but aesthetically, it’s difficult to put them in the same camp.

The previous generation Clubman never really sold me on its awkward, barn-door figure, but the longer, lower, wider, rounder 2016 redesign is attractive from all angles. Though American buyers have never been as enthused with wagons as European consumers, the micro-scaled Clubman should interest sedan, hatchback, and utility-minded shoppers alike. The jovial nature that I found within the Clubman’s cabin is just as prominent from the outside. Big, excited headlights, striking 17- or 18-inch wheel designs, and customization options galore add up to a unique, charismatic departure from the norm.

The previous generation Clubman was a bit of an oddball. With a shooting brake style rear and the same narrow body as the Cooper Hardtop, the Clubman couldn’t seem to find its design or utility groove. For 2016, MINI hasn’t just added a few inches to the car’s wheelbase, it’s granted over a foot in length and 4.6 inches in width. As a result, the cabin comfortably seats four large adults or, with the rear seats folded, 48 cubic feet of cargo. In the name of science, I wedged a coffee table and a set of bar chairs (courtesy of Craigslist) within the boot without much trouble. The added space doesn’t just benefit rear-seat occupants either. The new dashboard is pushed further away from front passengers, which, combined with ample headroom, creates an airy feel. Best of all, there are numerous cubbies and trays to stash your accouterments. Until the Clubman, I had yet to find a door bin large enough to fit a 32-oz. Nalgene bottle. I suppose I shouldn’t be surprised – MINI has been warping physical realities since the ‘60s.

While you’re admiring interior volume, you’ll also begin to appreciate the creative cockpit. I couldn’t help but get the impression that MINI’s interior designers had a good deal of fun working the details of the Clubman. Where simple buttons or dials would do, MINI added toggles and switches. Something as ordinary as activating the reading light is somehow exciting when pulling a trigger instead of tapping a button.

I’m not typically one for mood lighting, but by associating specific light colors with drive modes and infotainment functions, the shifting palette felt cool instead of childish. MINI also excels at hybridizing these funky details with premium textures and materials to maintain a more exclusive demeanor. Whether the exterior intrigues or not, it’s hard to argue that the cabin is as plain Jane as the majority of the Clubman’s rivals.

Another key differentiator of MINIs is their interior feature set. The 2016 Clubman comes equipped with a 6.5-inch Visual Boost infotainment system, MINI Connected apps, ambient lighting, dual-zone automatic climate control, leatherette seats, Bluetooth, and eight airbags. While a larger screen is available, the standard unit is well sized for the vehicle and effortless to navigate, thanks in part to a BMW iDrive-inspired dial and core function buttons. During my time with the Clubman, I also ventured on a three-hour trek, which gave me ample time to use MINI’s cruise control and, due to some bad weather, automatic rain-sensing wipers. The cruise control functions are found on the three-spoke steering wheel and include single mph adjustments with a light press of the button, or five mph increments with a firmer press. Though cruise control is a lightly used function for most, I found MINI’s system to be among the more intelligent designs on the market.

Ported over from the smaller, lighter Cooper Hardtop is MINI’s new 1.5-liter TwinPower turbocharged 3-cylinder. While the S designation pumps out a healthy bit more power from a 2.0-liter unit, the entry-level Clubman still manages 134 hp and 162 lb-ft of torque. I found the compact to have plenty of pep for freeway onramps and planned passes, but if you’re out of the 2,000-4,000 rpm sweet spot, you’ll need more runway to maneuver.

Surprisingly, the little motor also releases a pleasant tone as it exercises. Far from a complaining whine, the note seems to encourage play instead of begging for relief. In fact, it’s a bit confusing to the senses as the engine sound builds but the torque drops off. My rule of thumb is as follows: for optimal performance, short-shift to remain in the meat of the powerband, but for the best noise, ring that sucker out. The Clubman also comes standard with three drive modes: Sport, Normal, and Green. Predictably, the Sport mode sharpens the throttle and steering response while Green makes the powertrain feel lazy – too lazy in my opinion. Frankly, unless you’re attempting to suck every ounce of efficiency from the motor, Normal mode is the best blend of pep and economy.

Even as I demanded the engine’s best behavior, I managed an admirable 32 mpg of mixed-cycle driving. MINI quotes the base Clubman at 25 mpg in the city and 35 mpg on the highway, so I’d call those numbers conservative, based on my tests.

Adding to the driving pleasure is MINI’s delightful 6-speed manual transmission. While a 6-speed Steptronic automatic is available for more coin, the manual unit is so easy and enjoyable to row that I’d recommend saving your money for other extras. Each truncated throw of the gear level is met with a satisfying click into place. As you prepare to downshift, the Clubman also makes ready your transition by blipping the throttle – a neat feature that alludes to the car’s sporty intentions. A small indicator on the TFT driver display always seems to request a move to sixth gear – and in the name of frugality, it’s a reasonable request – but I struggled to remember logic every time I hopped in the driver’s seat for a short jaunt.

Perky powertrains and well-sorted transmissions are a great combination, but ultimately hit a flat note without a willing suspension to complete the symphony. MINI’s Clubman delivers once again with a nimble setup to encourage energetic maneuvers. Light, but direct steering readily points the Clubman into corners and progressive weight builds within the rack to communicate front-end traction.

As I emerged from curves, laying on the throttle, never once did I experience the dreaded torque-steer or front-end plowing. Rather, the Clubman refused to yield any significant amount of body roll as it attacked each corner, using every ounce of its front-drive platform’s potential. I have no doubt that in an emergency situation, the MINI would promptly avoid any hazards while maintaining its composure.

The Cooper Clubman’s taut suspension geometry does come with one weakness, however: ride quality. While the wagon’s front seats are perfectly comfortable thrones to pour on the miles, they can’t do much to distribute the bumps that flow through the cabin. Worst was uneven pavement, where the Clubman seemed to jostle over the road with a bit too much built-up tension. Never did the firm suspension ruin the overall ride, but considering my tester Clubman wasn’t riding on low-profile tires and didn’t have the stiffened calibration of the S variant, I’d worry those two characteristics could push the comfort level down further.

While the Clubman boasts several segment-topping tech features, there are some that come at aggressive expense or are missing altogether. While visibility is quite good, I find it odd that a backup camera isn’t included among the list of standard equipment, and worse, that it can only be added as part of the $1750 Technology package. Comfort Access falls under the same category. Being able to leave the key in your pocket as you approach the doors has become standard on several mid-trim compacts, but at least that feature can be tacked on for just $500.

The above omissions are forgivable, especially because they can be remedied, however, there are some missteps that can’t be avoided. Most frustrating is the radio, which doesn’t turn off when the car does, meaning if you forget to manually turn off the system, opening your door will greet the parking lot with music or your Bluetooth phone conversation. The worst scenario takes place when you’ve arrived at your destination but are still on the phone. On most Bluetooth-equipped vehicles, when you shut off the engine, the call will simply be transferred back to your mobile device. However, in the Clubman, your phone call is held hostage until you’ve manually changed the audio output back to your phone, or you’ve turned off the infotainment system and waited for the call to transfer.

Finally, there’s the key fob, a cheap-feeling, clunky piece of equipment. It wouldn’t be so bad if I didn’t need to pull the key out of my pocket to open or lock the doors, but fondling the thing so often reminded me of its budget design.

Though the 2016 MINI Cooper Clubman’s spec sheet isn’t all-inclusive straight from the factory, at a $24,100 starting figure, MINI’s first compact trumps its competition before you ever consider packages or options. The Clubman’s driving experience, premium cabin, and merry design is just plain better than humdrum people-movers. When you aren’t asked to give up an ounce of utility or reliability, why drive something lifeless and uniform? MINI’s all-new Clubman is here to rescue those who dread the dreary.