The 2016 Malibu still has a few minor flaws, but it’s finally a true competitor for the segment leaders and worthy of a thoughtful test drive.

Who do you think has the most difficult job in the automotive industry? Ferrari designers? Porsche engineers? Certainly these talented individuals face remarkable challenges, but in fact the team of people who are tasked with the greatest challenge are those who must produce the most mundane vehicles. And in the world of dull, it doesn’t get much more bland than midsize sedans.

Why on earth is it so hard to design, develop, and market something that almost everyone you know owns? Because when it comes to one of the most congested vehicle segments, it’s impossible to succeed just by building something that satisfies consumer needs. No, automakers that aren’t graced with a legacy like Toyota’s Camry or Honda’s Accord must claw and scrape their way to a better market position by building a game-changing model.

To make a midsize sedan buyer hate their lives a little less while simultaneously satisfying their practical needs is no easy task. Chevrolet estimates its 2016 Malibu is up to the challenge, but first it has to get the attention of those who are either halfway to Toyota’s showroom or about to jump ship and swim to crossover island.

Midsize sedan designers are given some pretty narrow lines to draw between. If they go too bold with their styling, it has the potential to scare off some buyers. However, if they are too conservative, consumers simply won’t abandon the segment leaders for a numb design.

Chevrolet’s approach to the 2016 Malibu’s redesign was to distance its model as much as possible from the dreary styling of the present car. Longer, lower, and leaner than before, with stubbier, lower front and rear ends, the new generation sits tight to its wheels. The cleaner profile is helped by a roof that comes to a point further towards the rear, similar to a four-door coupe. Though the Malibu’s silhouette is easily my favorite element, the all-new front end has plenty of character, too. Hints of the 2016 Camaro and C7 Corvette are found in the tri-point front splitter, slender grille, and air damns. Chevrolet says these accents will find their way onto other models down the road, and that’s welcomed news. At the rear, the new Malibu loses some of its pizazz with more of a period at the end of its new design statement than an exclamation point. Chevrolet can’t seem to nail it when it comes to Malibu taillight designs. The last three generations just seem to be rushed endings – a shame when the rest of it looks so fetching. Fortunately, the latest rear end is more benign than prior blunders – the handsome exterior impression remains.

The greatest compliment I can give the new Malibu is that it’s only playing second fiddle to one midsize sedan in terms of external styling. Mazda’s 6 sedan still holds the crown of most striking, but in a field of over a dozen competitors, losing only to the Mazda is a massive victory. Moreover, the 2016 Malibu triumphs in other arenas besides design.

It’s all good under the hood

Among the new Malibu’s highlights are its two new engines. Replacing the present 2.5-liter naturally-aspirated four-cylinder is a compact turbocharged delight. The entry-level sedan will use a 1.5-liter turbo four-cylinder making 160 horsepower and 184 pound-feet of torque. Down 30 ponies and 7 lb-ft to its N/A predecessor, but with the 300 pounds of weight savings from the Malibu’s new platform (3,097 lbs curb weight), it’s a competent starting point mated to a six-speed automatic. Those looking for more gusto can opt for a 2.0-liter turbocharged four-cylinder making 250 hp and 258 lb-ft of torque paired with a new eight-speed automatic transmission – the first of its kind for a front-wheel drive model from GM. The 1.5-liter unit offers 27 city and 37 highway mpg figures while the 2.0-liter mill checks in at 22 city and 33 highway mpg.

Borrowing hybrid drive components from the second generation Volt, Chevrolet’s 2016 Malibu Hybrid is ready for primetime. A 1.8-liter direct-injection four-cylinder is matched up with a two-motor electric drivetrain and a 1.5 kWh lithium-ion battery for a combined 182 hp and 277 lb-ft of torque. Only the Honda Accord Hybrid can match the Malibu’s 47 mpg estimated combined fuel economy (48 city/45 hwy). The new hybrid drive also offers fully-electric driving up to 55 miles per hour before the engine chimes in.

Among its classmates, the Malibu has never rested on its performance laurels, but its new engine range and lighter chassis contribute to respectably enthusiastic dynamics. The vast majority of shoppers will be more than satisfied with the 1.5’s energy, but the 2.0 is sincerely peppy; its low-end torque can outrun lazy V6 challengers and get the sedan up to speed in a jiffy. Should the additional fuel savings lure you to the Hybrid, you’ll find plenty of power on hand and smooth, instant torque. Regardless of engine choice, the Malibu handles itself well during aggressive steering input and under hard braking. Sure, the wheel fails to communicate between the tires and your hands, but the body is willing once you give the car direction.

Class where it counts

Complaints about the present iteration of Chevrolet’s midsize contender extend beyond its vanilla looks to its rental-car interior. Fortunately, much has been made right for 2016.

The air of cheapness is all but completely gone within the new Malibu’s cabin. It’s not impossible to find a rough plastic trim piece here or there, but almost every major point of contact has been refined, softened, and/or stylized. I have my qualms with a few interior color combinations (gray and saddle brown?!) and question the choices for interior trim patterns – some look like tacky wallpaper – but all is forgiven when taken as a whole. The seats are fantastically comfortable, the steering wheel feels right between the palms and the redesigned dash is handsome. The addition of 1.3 inches of rear legroom also means full-sized adults have plenty of room during longer trips.

Perhaps the biggest surprise is Chevrolet’s retuned MyLink infotainment system. Not only is the 7.0-inch (8.0-inch available) center stack display vividly clear, it’s instantly responsive. Inputs are immediately processed and the most commonly used functions are displayed prominently on the home screen. Considering Chevrolet’s non-tech-savvy target audience, this is a near perfect system. Rivals may offer more advanced features, but by simplifying its interface and hastening its responsiveness, Chevy has ameliorated many of the issues buyers have when forced to operate touch-screen technology instead of simply pressing a physical button.

In terms of safety features, the new Malibu is brought confidently into the modern age with features like City-Speed Front Automatic Braking, Front Pedestrian Braking, IntelliBeam, Front and Rear Park Assist, Side Blind Zone Alert with Lane Change Alert, Lane Keep Assist, Following Distance Indicator, Forward Collision Alert and Rear Cross-Traffic Alert. Beyond the long list of confusingly-named technologies, Chevrolet has introduced its Teen Driver safety functions (activated by key fob), including a programmable alert when drivers exceed pre-determined speeds and a report card that shows driver behavior. All told, the 2016 Malibu can be equipped with some of the most advanced and customizable safety systems in its class.

The 2016 Chevrolet Malibu still has a few minor flaws to overcome, but it’s finally a true competitor for the segment leaders and worthy of a thoughtful test drive. Alas, that last bit is the new car’s greatest obstacle – bringing shoppers into showrooms. Sadly, the Malibu has been such an uninspired option within the midsize arena that many of the nearly 2 million buyers will drive right by dealers.

Fortunately, Chevrolet has a plan. Though the details were held close to the chest, the U.S. automaker plans to unleash a veritable onslaught of advertising to make consumers aware of the significant changes to its sedan. My advice to Chevy would be to set up as many pop-up test drive events as possible. Butts in seats will sell these cars, but getting the attention of the owners of those butts will take some doing.

The 2016 Chevrolet Malibu starts at $22,500 (including destination) with pricing yet to be announced for the Hybrid that goes on sale in the Spring of 2016. 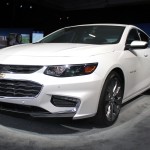